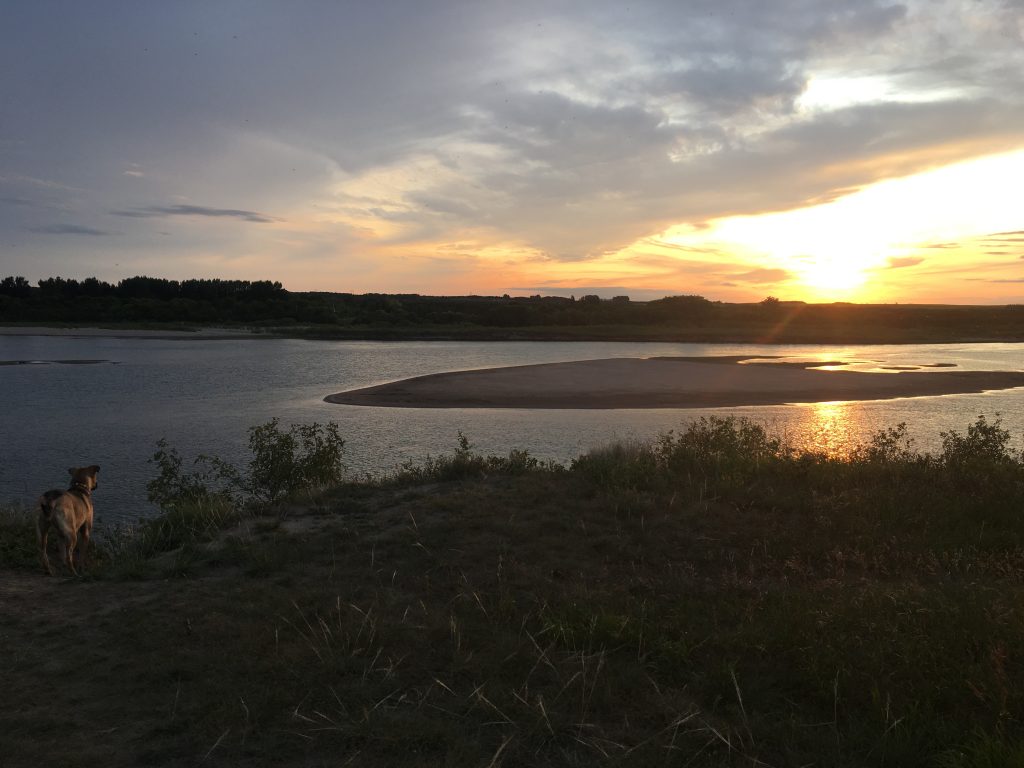 I woke up this morning in my quiet house with my children still sleeping. Drinking tea with the sun shining through the window onto my bare legs, this story — which had just been seen and felt in parts throughout the last year —  flowed completely through me. I wish I could read it to you, so you could close your eyes (as I like to imagine you would) and with each word feel the river touching your legs and teasing you forward in it’s flow. But this will have to do.

I see myself floating down a river, the wind softly blowing my hair, sun on my neck, holding hands with someone I love. The flowing water is as clear as a mountain spring and under it are rocks which sometimes jut out, causing us to maneuver our bodies around them so we don’t get hurt as we float. The banks are high enough on the sides and I smile when I see animals have made houses in the dirt along the edge. There are branches sticking out from the banks — some worn smooth by the water that flows over them at times, and some so sharp that we need to duck at just the right times to not get hurt by them. There are some shallow sections in the river where we often stop to play, laying half in and half out of the water, feeling the slight lull of it flowing over our legs as the sun warms the rest of our bodies. Sometimes we choose to spend days in these parts of the river exploring and being with the flow but not moving very far at all. In these places — between fully floating and totally stuck — we often find the best treasures, difficult to explain to anyone after, but nevertheless treasures that deeply impact the way we float on.

Inevitably as we choose to continue on, the river changes again and we float together, until both of us get caught in a pile of branches that’s pooled along one side of the river. On my side the branches are less thick (this time) and I carry on with only minimal effort to free myself. The force of us getting caught though is enough to tear our hands apart and, while I notice the disconnect right away, it takes me a minute to stop because I’m still flowing along with the river. Stopping myself is difficult and it requires a great deal of energy to push backwards against the flowing river. I do it though, because I chose to float the river with this person and I’m not going to leave them behind just because they’re “stuck” in the branches. I want to keep floating with them. So I paddle against the current, breathing heavily as I slowly move back wards towards where they’re “stuck” in the branches. Once I get there I grab onto the pile and use it to pull me around closer to them and then, still unable to reach them in their pile, I choose to tread water alongside them while we try to figure a way to get them out.

I love being beside the people I love at all parts of the river – even if they or I am stuck in the branches. Yet at some point, often after days of trying to figure out how to get them unstuck, I feel a deep hole of fear in my belly and hear a little girls voice telling me that “I need to get them out, or I’ll lose them.” Already tired from days of treading water to stay in one place against the current, I franticly try thinking of other ways to “help” them. If I can just lift one arm out to grab the branches and toss them down the river maybe I can free them. So I try this, constantly being forced forward each time I lift an arm out to grab a branch, toss it and then swim back against the current to where I was treading water beside them. I do however manage to remove a few branches this way. Sometimes the branches are tangled up too much though and instead of the easier task of just grabbing and throwing them, I have to hold onto the pile and work to untangle them while fighting against the river seemingly wanting to pull my legs forward to see what’s around the next bend. The top half of my body is pulled backwards  as I work to untangle branches and the bottom half is pulled forwards with the flowing river — I must appear to be in such conflict with myself.  But “I’m not!” I tell myself in a strangely child like voice.  “I’m simply “helping” this person, whom I love, become unstuck so we can once again float the river together.”

My efforts feel fairly grand, so grand that at times I imagine that this is the point of the story (if there was one) where the narrator would describe me in heroic ways. Pausing to think of how heroic I am, I look at the person in the middle of the branches and see that they’re not sweating or panting at all. They’re merely sitting — what looks like – comfortably amongst the pile of branches. “But they can’t be content to stay here I tell myself,” feeling that awful hollow hole of fear in my belly. “They MUST want to come along. They always said they wanted to do this and when they got stuck they called for me to come back. They must still want it.” Conflicted by this I grab on tighter and watch them, waiting for a sign that they do want to come with me. In this pause I notice how deep the hole feels in my stomach and how hard the river is pulling my legs forward and how much I want to allow it. But “I can’t just leave them here” says the little girls voice in my head. “Good people don’t do that. Good people stay and fight no matter how hard the river is pulling them forward. It’s for them that I’m doing it!”

In this moment — the moment in the story where time stands still and the whole scene seems so perfectly clear — I feel the irony in my words and hear a woman’s voice speak over the little girls saying “Just as I have the choice to let the river carry me, they have the choice to stay. Both are choices and regardless of whether one is to stay and one is to go, it doesn’t mean anyone is leaving anyone.” Paused in time for a second while I contemplate what she is saying, I notice that the hole of fear in my belly is gone and……. just like that I let go. Like the most beautiful orgasm in the universe I’m carried forward, swept into the ebbs and flows of the current and the wind in my hair and sun on my neck. I look back for a second and see the person in the branches, right before I’m swept into another orgasmic current, smiling at me lovingly and experiencing life in the way they are choosing. I smile back at them with a smile full of absolute love, then close my eyes and float on with the life I am choosing carried forward with the sound of the woman’s voice whispering softly in my ear “It’s all choice. We all choose each day to flow or to stop flowing. The only way I will lose them is if I stop my own flow.”

**** Dedicated to one of the many partners on my river :Justine. Thank you for reminding me of my own choice and my own voice. <3